One of my users recently started having a problem with receiving duplicate text (or SMS) messages on his Blackberry.  This would happen to the majority of messages he received, but not all of them. And some would only have one duplicate message but others might eventually have 5 or 6 copies of the same message.  Sometimes the duplicates would show up with different dates as well.

I think something was corrupt with the text message database on his phone so I wanted to wipe out all text messages and see what happened.   So I connected his Blackberry to my laptop running the Blackberry Desktop Software and made a full backup of the phone.  Then in Blackberry Desktop I went to Device -> Delete Data and selected both "Text" and "SMS" entries just to be sure.

After wiping out those databases, his duplicate text message problems seems to be gone. For now anyway. :)

at May 24, 2012 18 comments: Links to this post
Email ThisBlogThis!Share to TwitterShare to FacebookShare to Pinterest
Labels: Mobile Devices

I was attempting to sign into Microsoft Lync Online the other day (part of an Office 365 implementation) and I received this error message...

"Cannot sign in to Lync. There was a problem acquiring a personal certificate required to sign in". 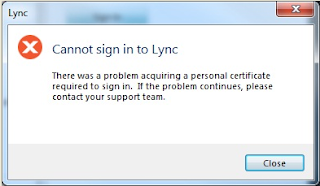 Of course I tried all of the typical stuff - restarting Lync, rebooting the laptop but it didn't help. No other users were reporting this issue - they could all sign in just fine - so I'm assuming it's something local to my Windows 7 64 bit laptop.

I did some research and it looks like something was corrupt with my local cached credentials.  Not sure why - i didn't change my password or anything like that.   I found this article from Microsoft...

Here are the steps from that article that worked for me...

I was testing out the Windows Autopilot "White Glove" feature this week.  This is a new feature of the Intune AutoPilot service th...

I'm a senior IT consultant focusing on small business technology support and solutions - Microsoft Office 365 (Cloud hosted Exchange, Lync and SharePoint), Microsoft servers and desktops, remote access, mobile devices (iPhone, Android, Blackberry), backups, etc. I work with clients in the Baltimore, MD area. Please feel free to email me if I can be of assistance!